So you’re thinking about a Drive-in Movie Party?  I will warn you making the cars is a bit of a time investment.  But after that, it was one of the easiest parties I have ever thrown (both in prep work and in hosting!).  Let me make it EVEN easier for you… everything you need to throw an awesome outdoor movie night gathering!

I have been wanting to throw a drive in move party for ages! And my second oldest was kind enough to oblige for his 5th birthday. The invitation is in a separate post and can be found here.

How to Make the Cars for a Drive-In Movie Party

I started by making the cars. You can easily round up used and free boxes from your many amazon deliveries (if your anything like me) or businesses around town, however I wanted all the boxes to be uniform.  I’m kinda OCD like that.  So I went ahead and purchased them on amazon.  (I think they are unavailable now, similar sized ones here). This way they come without any markings on them and fresh and clean. Makes it much easier to paint & work with in my opinion.  The size and sturdiness of the boxes worked out pretty perfectly, I would definitely recommend a similar size (20X16X14).  It was a bit cozy for my 7 year old but worked great for my 5 & 2 year olds.

So first things first- I taped all the boxes with one flap up (as shown) and spread them all out on a big tarp.  I recommend taping the flap that you have up as securely as possible (read: lots of pieces of tape, I used packing tape but perhaps duct tape would be better?) as the children will lean on their “dashboards” once they are inside.  None of our dashboards collapsed, thankfully, but I was worried about that. I spent one Saturday painting them, and the following Saturday adding the wheels, racing stripes, steering wheels, headlights & tailpipes.  Each time it took me about 3 hours, so about 6 hours total to do 20 boxes.  I painted the boxes with a roller.  Spray-painting cardboard=finger cramps and TONS of bottles of spray paint.

Except be smarter than me and don’t waste time painting the bottoms- that was just dumb.

The wheels & steering wheel are just black paper plates I got at the dollar store. I glued them on with a hot glue gun.  The tail pipes are toilet paper rolls that I cut in half and spray painted silver.  They were also put on via hot glue gun.  But if you can think of a more effective method to get them on I would advise that as there were very few that made it to the end of the party without being knocked or broken off. The license plates are full page sticker labels (like these).

At first I made one license plate to a page, but they looked way too big so after that I changed to 2 to a page and I think that was much more proportional.  I am happy to personalize up to 20 license plates for you for a fee of $10 (paid via paypal, you receive the digital PDFs).  Just email me @ partylikeacherry@gmail.com if you are interested in having these, or any other printables for this party, personalized for your event 🙂

The racing stripes are just white duct tape (gotta love how easy that is!) and the headlights I spray-painted on with a homemade stencil and yellow spray paint.

Decorations for a Drive-In Movie Party

The cars took care of most of the decorations.  We also had a ticket booth, which I reused from youngest’s circus party (details on how I made it here).

I have to tell you I was very glad I saved it, despite hubby’s pleadings not to.  These are the tickets we made (which I am happy to personalize for your event for $7) and printed on cardstock.  Or some generic ones are included in the digital party bundle. The only thing I forgot was to actually come around and “punch” their tickets as the movie was starting, as I had intended to do 🙁 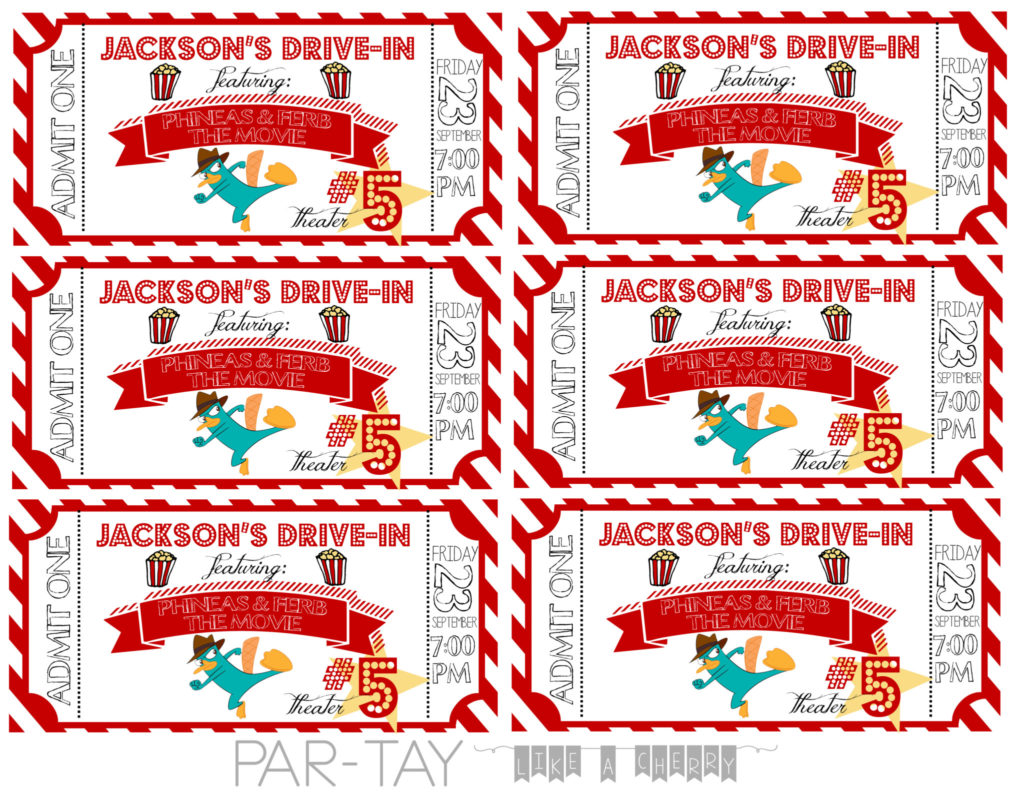 We strung some christmas lights around the yard, since it was an “after dark ” party I thought that would add some nice ambiance. And of course what’s a movie theater without movie posters? I just made one:

Strung christmas lights around it, set it up on the kids easel and stuck it next to the ticket booth.

And then of course we had to deal with all the “technology” of the movie.  This was honestly the part I was most stressed about.  We were just going to try to borrow a projector from my mother-in-law’s work but after seeing what a great deal they were on amazon we ended up just buying one (and its even cheaper now than when we got it!) I tested out the logistics of it a few times before the big night and we have used it a few times since, I cant speak highly enough of this projector! I don’t think you can beat it for the price.  I just hooked our roku right up to it and played the movie straight from netflix.

Our very fancy screen is just a king sized white sheet (with some blankets behind it so it wasn’t so see through) tacked to our porch railings/roof. You can buy an expensive screen off of amazon, but I thought our sheet was just fine 😉

Activities for our Outdoor Movie Night

As guests arrived we had a table set up right by the ticket booth with a bag for each guest.

Inside each bag was their personalized license plate, glow sticks, play money & stickers. We also had a table set out on the lawn with all kinds of stickers, puff paint, crayons, markers and other fun things they could use to decorate their cars.

So with their bag they could pick their car and decorate it, buy a movie ticket from the ticket booth & hit the concession stand with their play money.

Once they had their car decorated, their concession items and ticket purchased we settled down to watch the movie.

I was amazed how all the children stayed in their cars the whole movie!  I thought they would get out and purchase some more candy and treats from the concession stand but for the most part they just stayed put.  We included in the invitation for them to bring a pillow & blanket if they wanted which helped make the cars much more comfortable to sit in 🙂 After the movie we had cupcakes, sang to the birthday boy, opened presents, and played in the dark on our swing set and trampoline until children were dragged to their vans, cardboard cars in tow. Birthday boy was asleep in 0 seconds flat 😉

Food for a Drive in Movie Party

Our party was held later (to accommodate for the sun going down at just the right time). I wanted about 30 mins of sunlight before we started the movie so the kids had time to decorate their cars and things.  It worked out pretty well. The sun ended up being a bit too bright as we started the movie, but about 15 mins into it it was plenty dark.  Since our party was later we didn’t do a meal, just concession snacks & treats. I dont have a good “finished” shot of the whole concession stand. It was a pretty windy day so I didn’t set a lot of the stuff out until the last minute- but this gives you an idea… 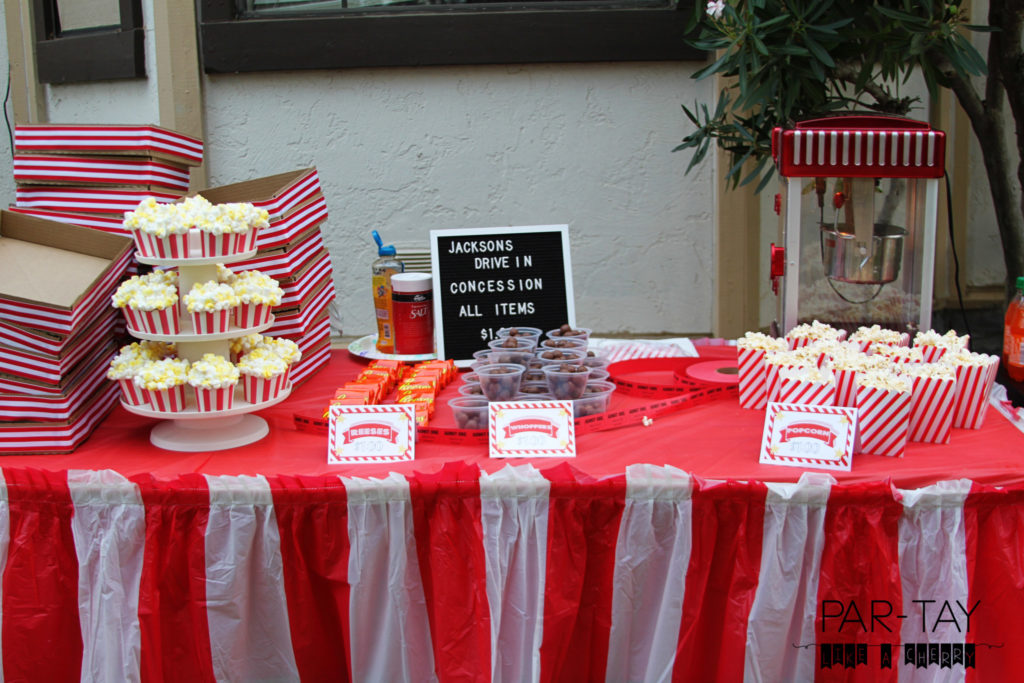 The table skirt pictured above can be found here.  I used it in conjunction with a dollar store red tablecloth.  As I mentioned the kids could use their play money from their bags to purchase items at the concession stand.  To keep things simple every item was $1.00. I gave each of them $5 but they had to purchase their movie ticket ($1) so that left them with $4 to spend at the concession stand.

My thought was they would buy 1 drink, 1 popcorn and 2 candies. But of course they could spend it how they wanted.

Tough decisions my friends! 😉 Isn’t she adorable in her perry the platypus costume?

My amazing mother in law found a popcorn maker at the thrift store and so Grandpa got the prestigious role of popcorn popper during the party.  Mmmm-mmm it was delicious! They sell the same one on amazon, but finding it a thrift store is definitely the cheaper route 😉 I was so happy with the popcorn boxes. I think they are adorable and they were the perfect size! And they were sturdy enough I saved a lot of them that were in good condition.

The little cups are those fruit bowl cups, you know what i’m talking about? Anyhow I got them through my hubby’s work but you can get similar type here.  Those are nice because they have lids so kiddos won’t be spilling candies on the way to their cars. The trays I also got from my hubby’s work, however before I got those I went to our grocery store and asked for some and they gave me a ton! The ones from my hubby’s work ended up being smaller and I thought a better size so I used those:

I just hot glued this ribbon around them to dress them up a bit.  At first I was going to spray paint them all red AND put the ribbon on, but after only getting 2 trays done with a whole can of spray paint I thought, “forget that”.

The cupcakes were another amazing feat by my mother-in-law.  I’m so lucky to have her as my party planning partner in crime!

Don’t they look amazing? We used these liners, they are more like cups actually, you slip the cupcake inside.

Printables for a Drive in Movie Party

You can get all the printables featured in this blog post (and a few bonus ones) for just $2.99 with the button below. If you’d like things like the license plates or movie tickets personalized I can do that for an additional fee, just shoot me an email partylikeacherry@gmail.com. I do include a few free printables with the button at the bottom of the post.

And I can’t close the post without giving a shout out to Come on Ilene, if you are throwing a drive in movie party you have got to check out her awesome post from which I got tons of ideas!