Jake is a staple in our house. The day they took Jake off of Netflix was the day I considered canceling my Netflix membership to make a statement. Spoiler: I’m all talk.

Started with the invites, (creaky frank is the font you want my dear!) 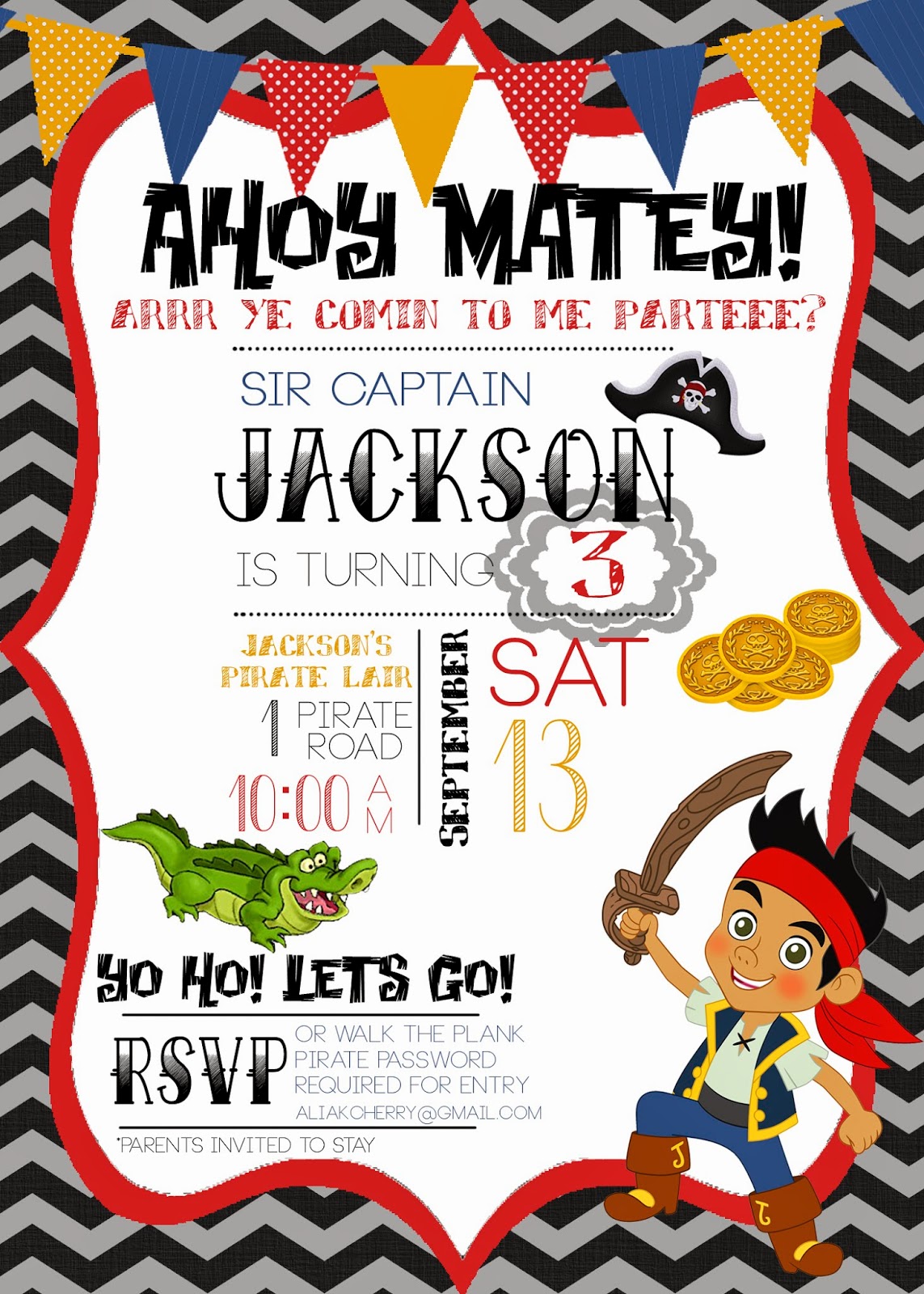 I can personalize this invite for you for $10, you will receive a digital JPEG file in return, if you are interested just send the details of your invitation to partylikeacherry@gmail.com

I tried my best to fashion the birthday party sequence of events after the show itself.  Party colors were black & red.  So when guests arrived we directed them to the “dress like a pirate” table where they could pick a pink bandana (Izzy), blue bandana (Cubby) or red headband (Jake) which i made out of red bandanas.   And if you wanted something extra special for the birthday boy amazon has full on Jake costumes here.  They also received eyepatches (I know that is not in line with the show, but a bunch of 3 year olds running around with eyepatches? COME ON, I couldn’t resist) and a treasure map. The treasure map was a map of the different games at the party which were all “pirate problems” they had to solve to earn gold dubloons.  I burned the edges of the pirate map to make it look- well- more pirate-y.  (How do things like that always end up taking way longer than you think they will?) 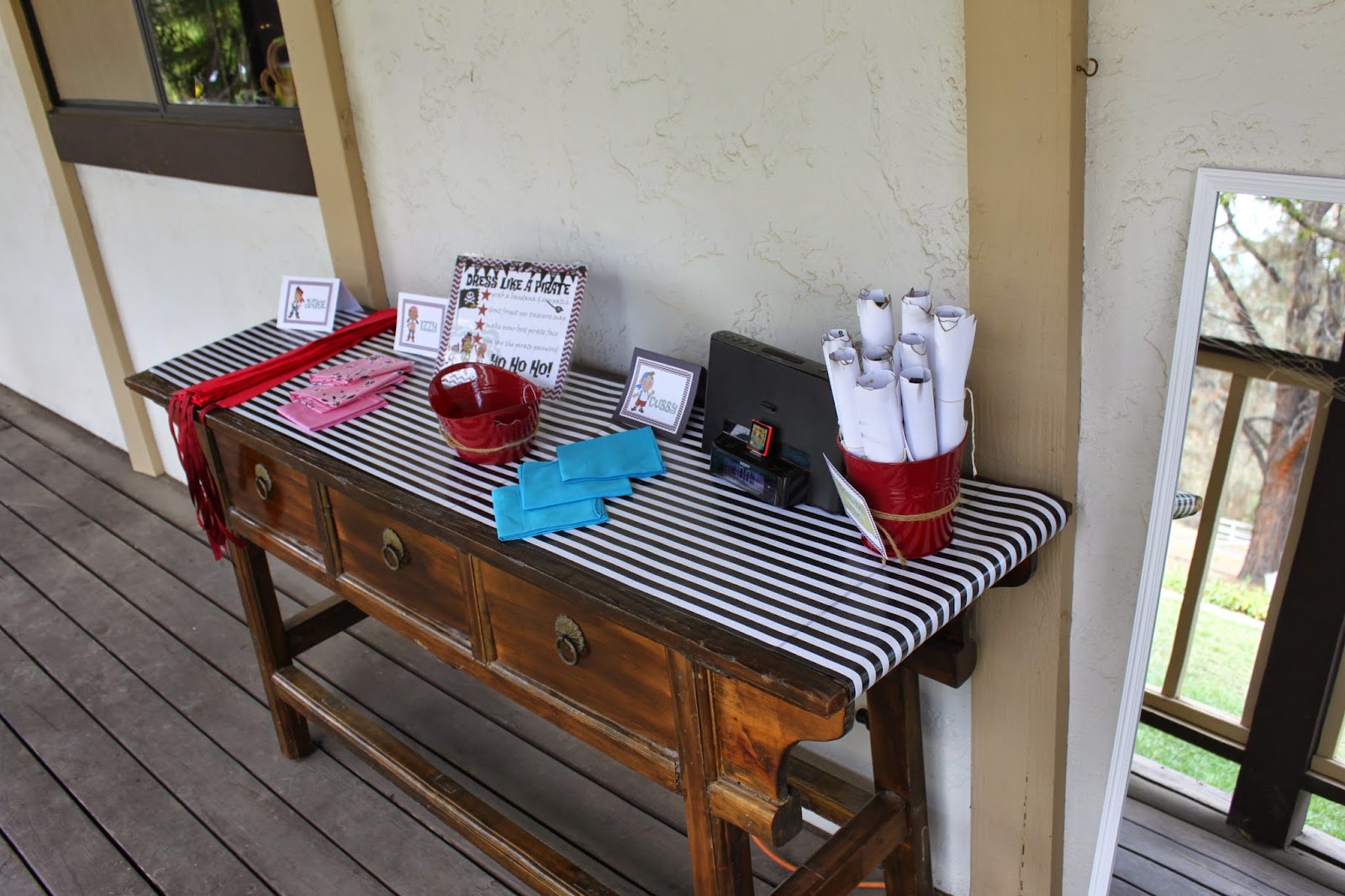 I put a mirror out there so they could see themselves in their pirate get-up.  And of course we had the Jake & the Neverland Pirates album playing- it was a crack up to see all the little pirates in their get-up rocking out to “Talk Like a Pirate” (my kids LOVE that song and insist on playing it full blast while we make dinner).

hint: burn the edges with a candle to make it look more authentic, roll it up & tie with twine.

Before they could collect their gold dubloons, they of course needed a treasure chest.  So that was the first stop. 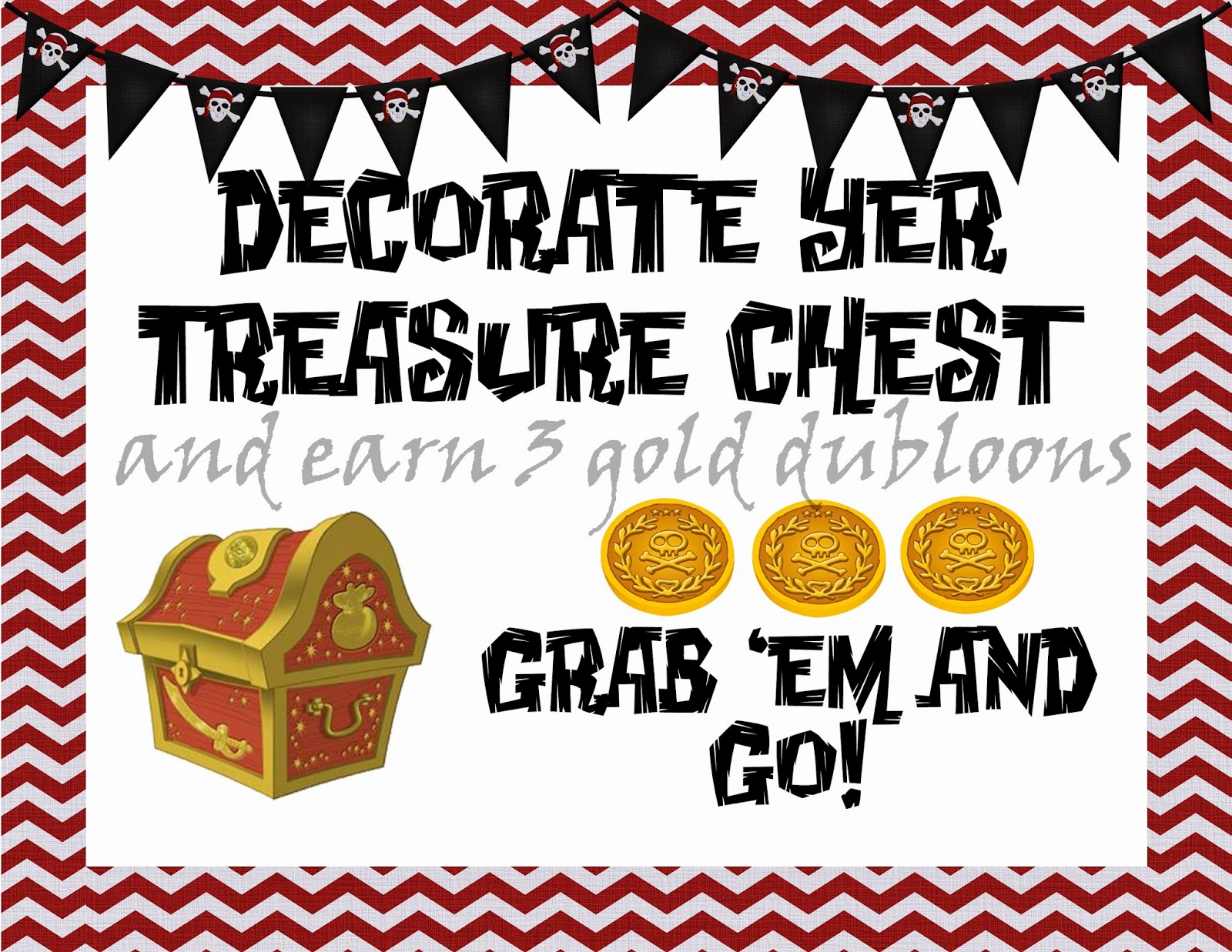 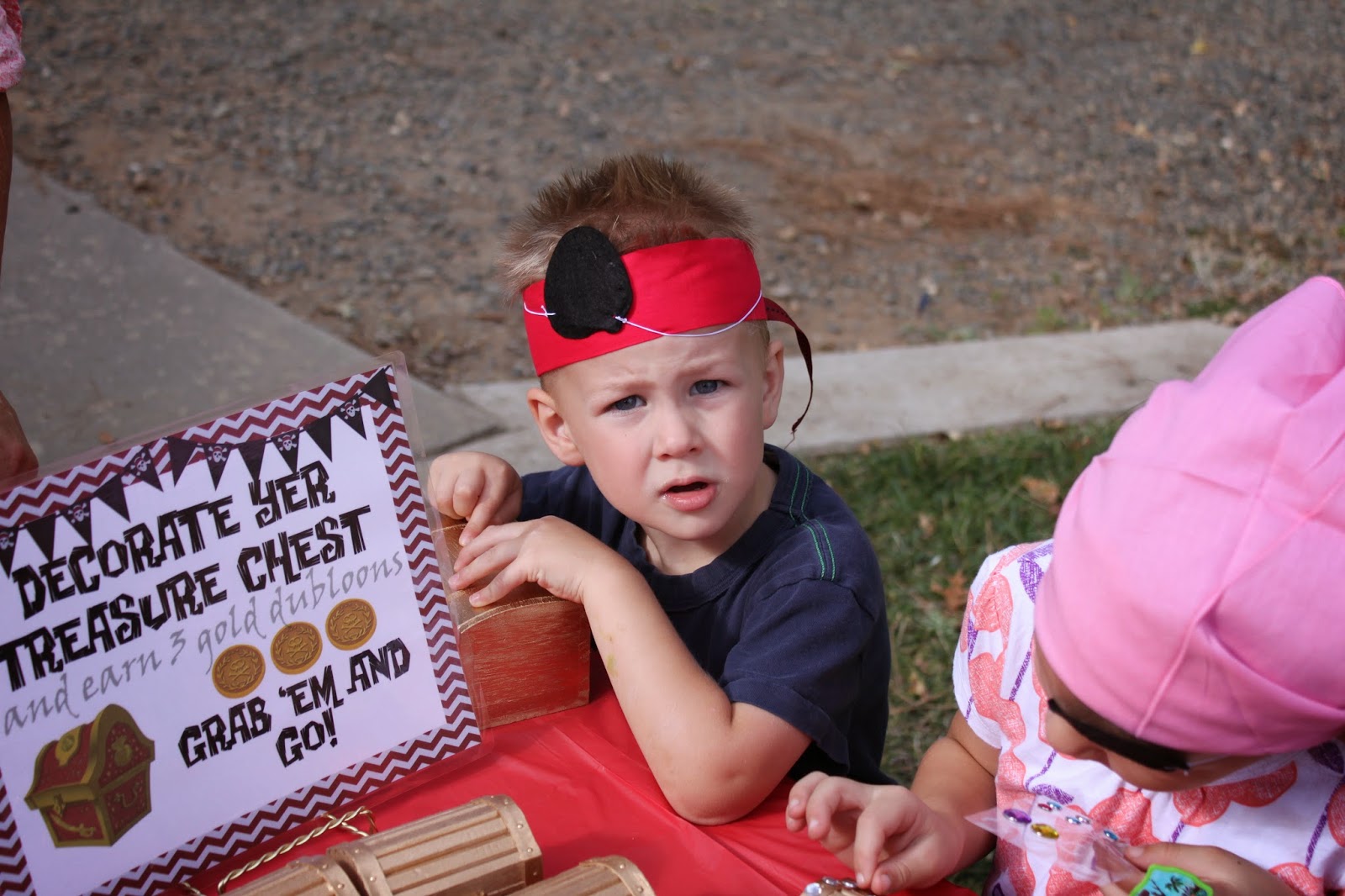 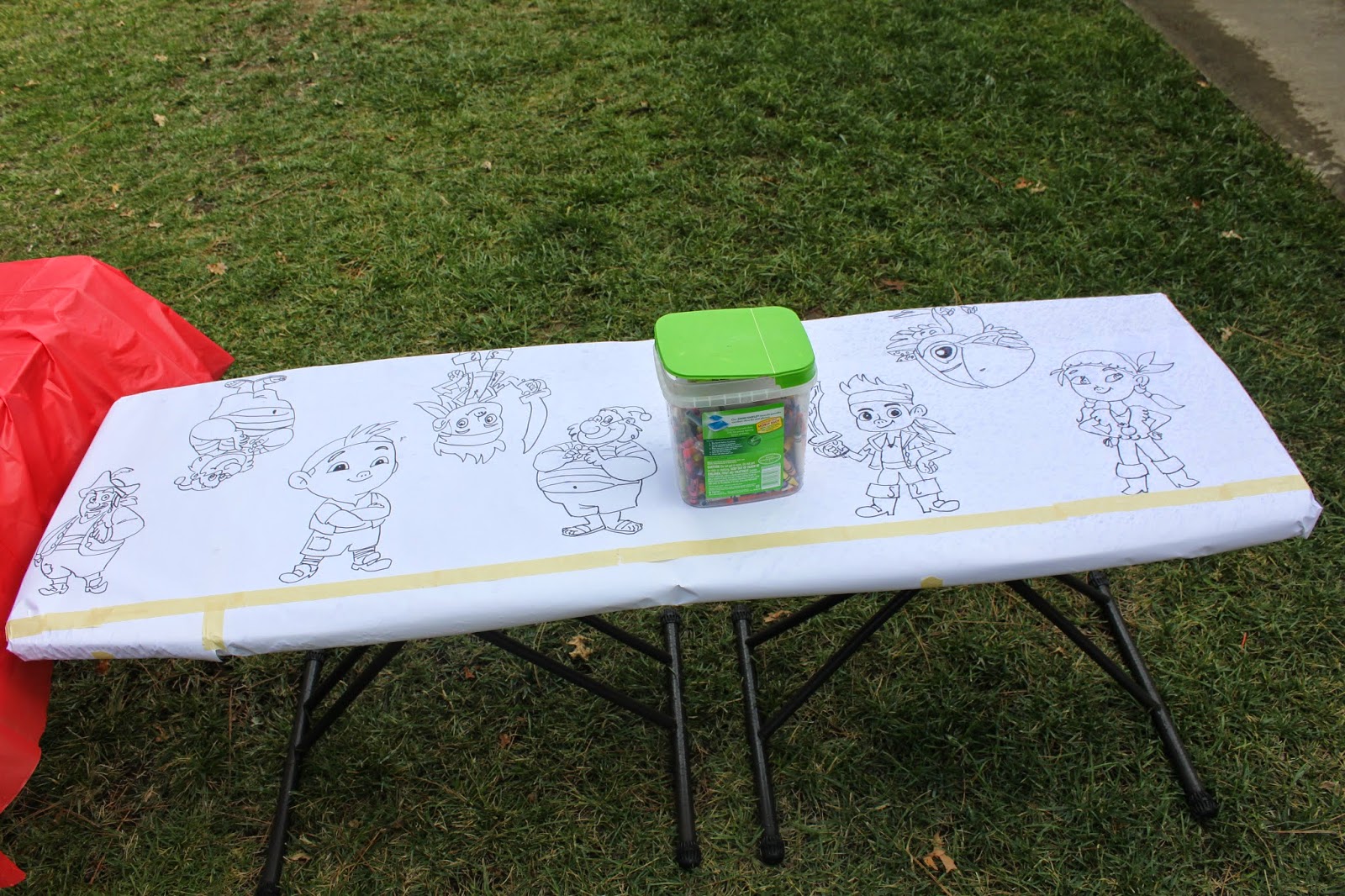 At this station I also had character images that I had traced that they could color.  Of course the sprinklers went off right before the party and got it pretty wet (I swear I turned them off!!) 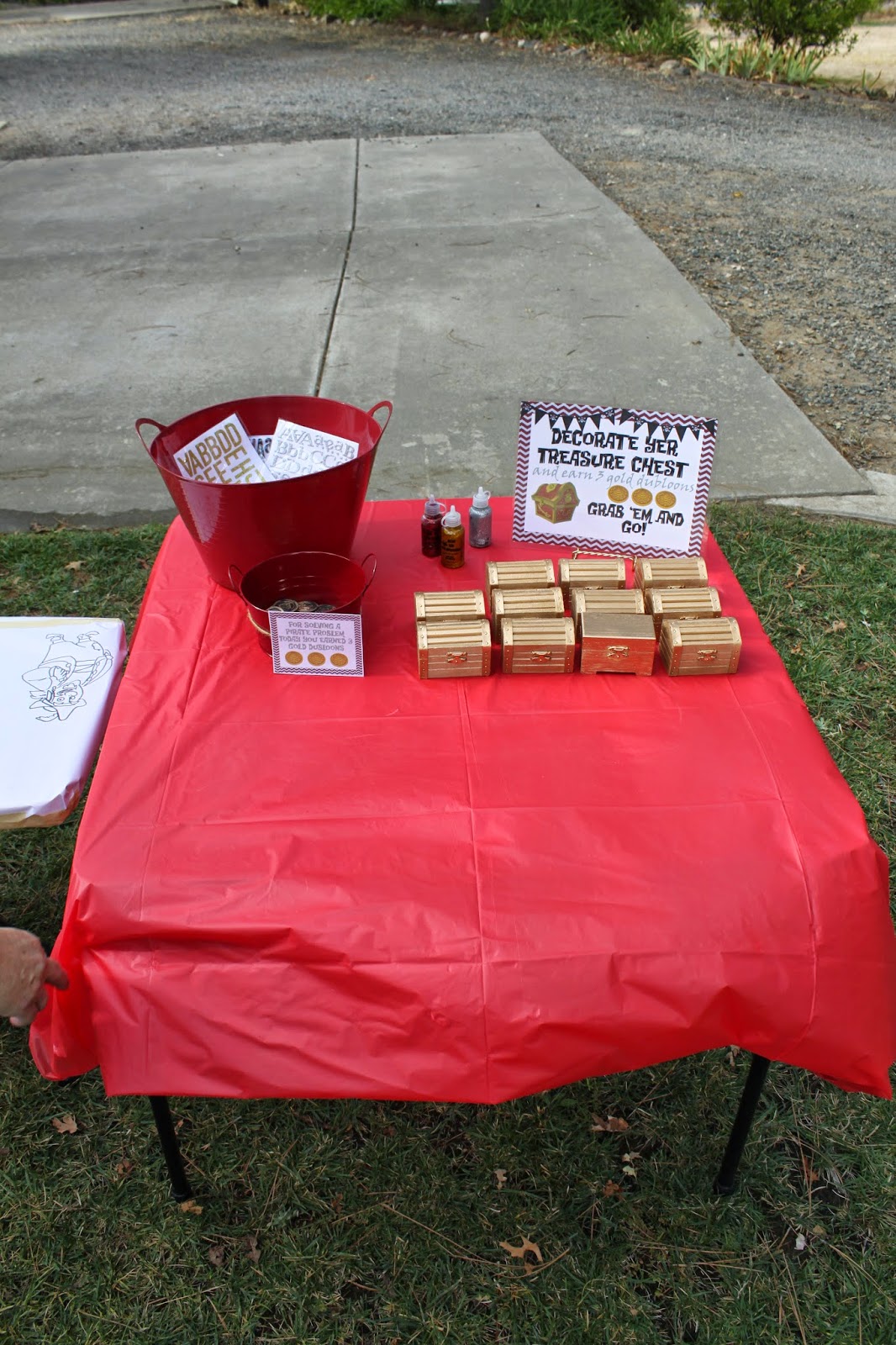 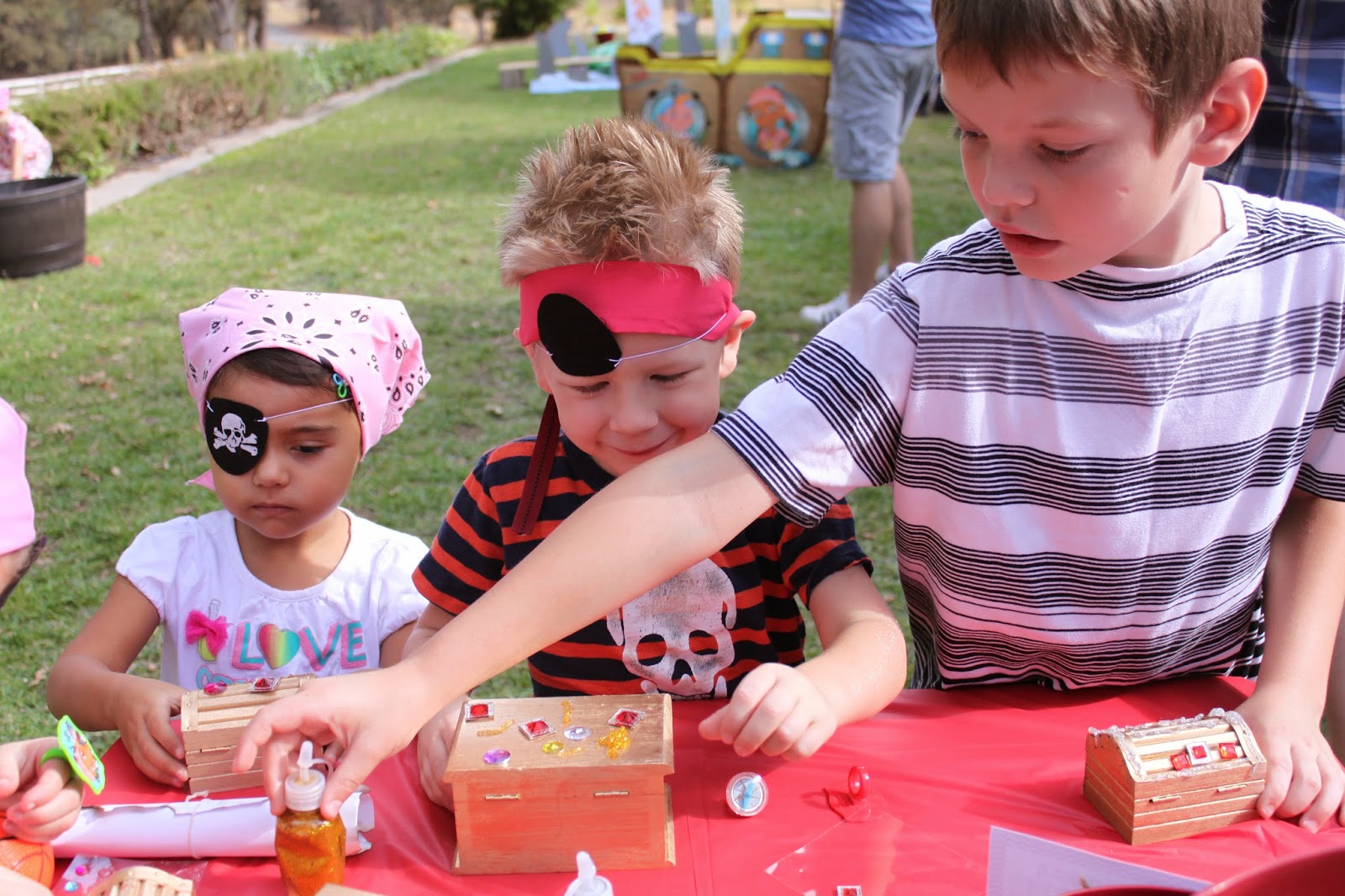 The treasure boxes I found at Michaels for $1.50 each. But they also have this throw away kind through amazon.  I spray painted them gold and got stick on letters & rhinestones etc for them to decorate them with, also some sparkly puff paint. After they had their treasure boxes there were three other activities for the kiddos-

I used a blue shower curtain that I happened to have laying around (??) , I cut cardboard and spraypainted it gray for the shark fins and used skewers to put them through the shower curtain and into the grass, and we had an inflatable alligator believe it or not (similar here).  The plank, as you can see, is just a board of wood held up by cinderblocks. 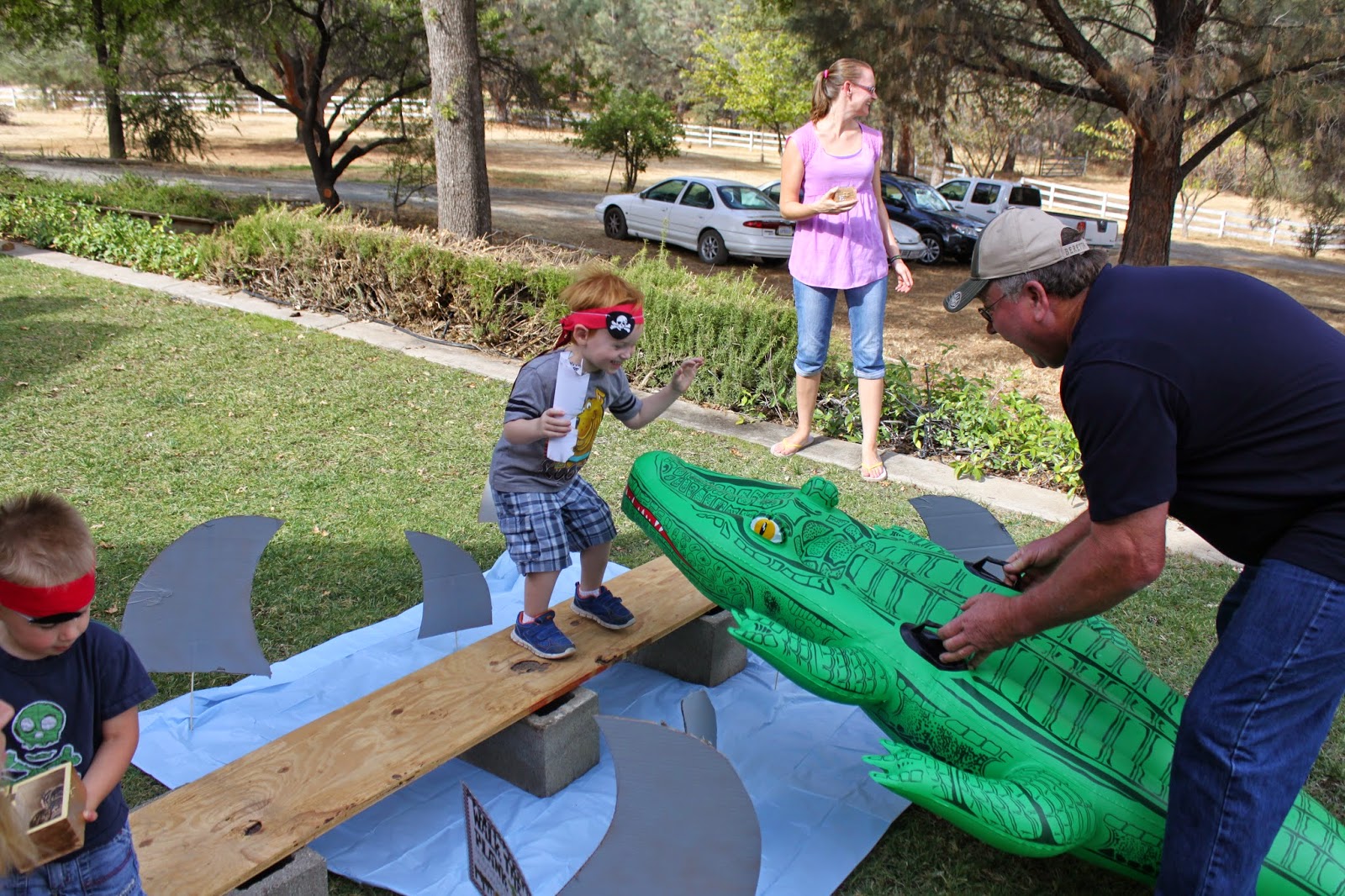 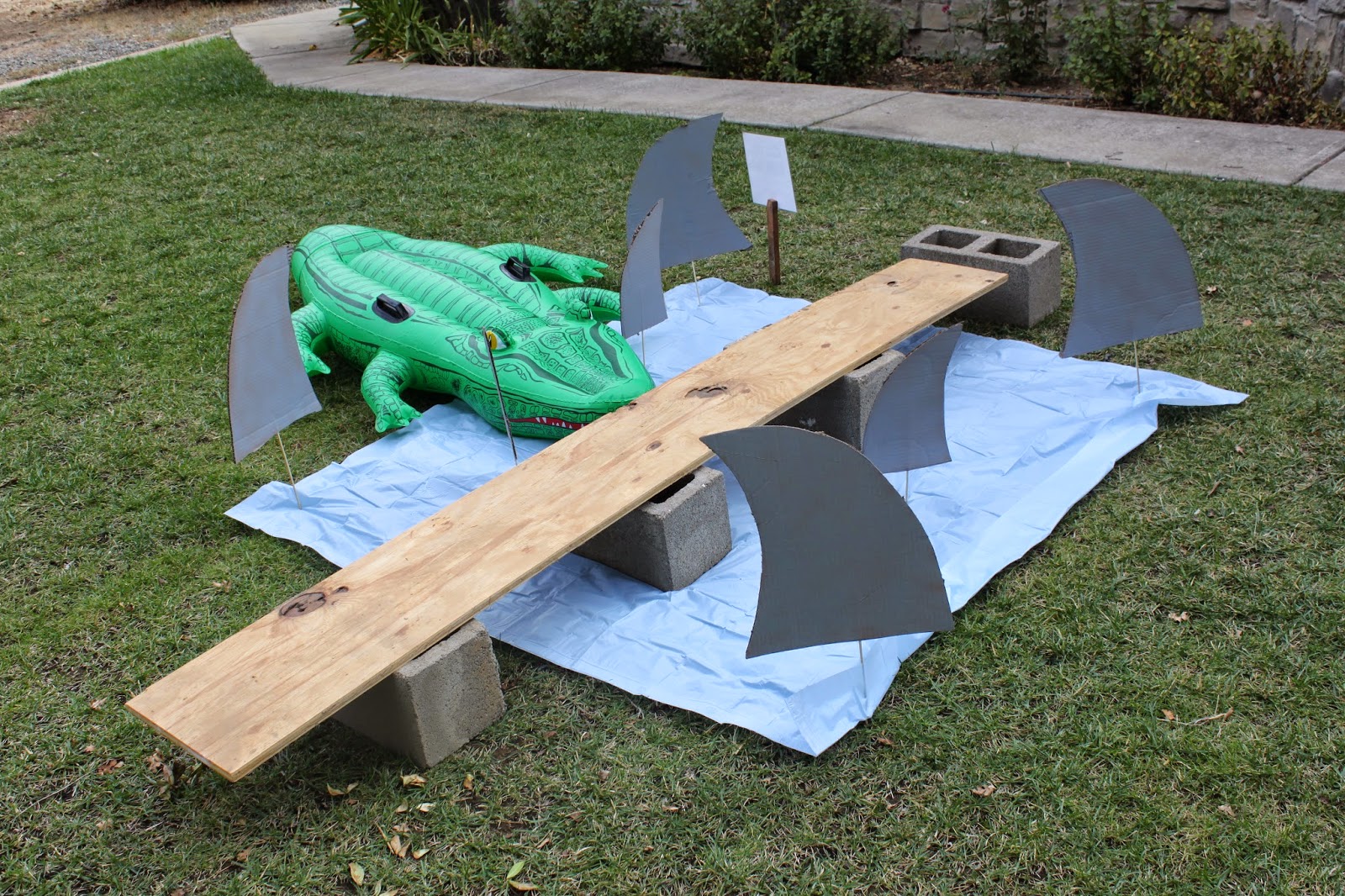 The dig for treasure station: 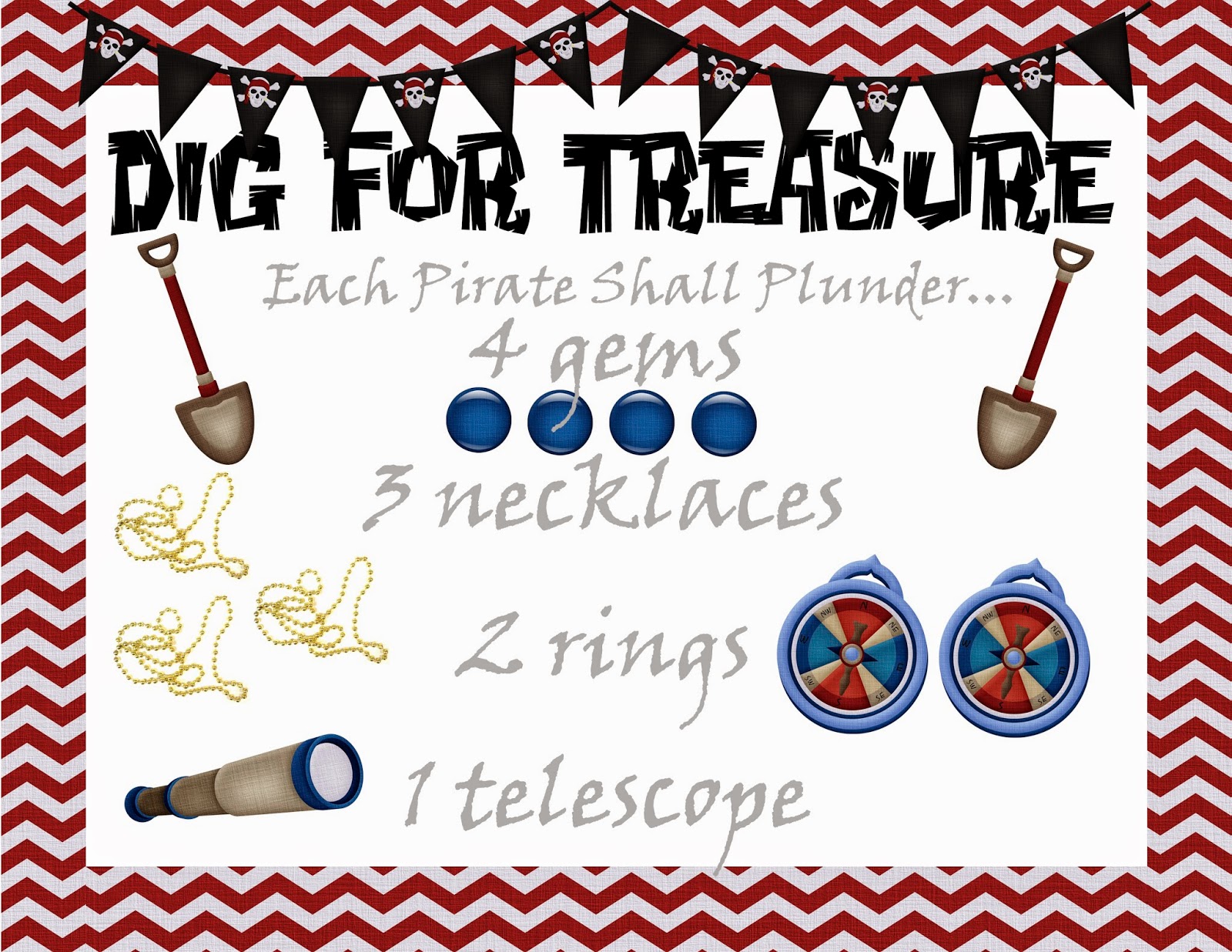 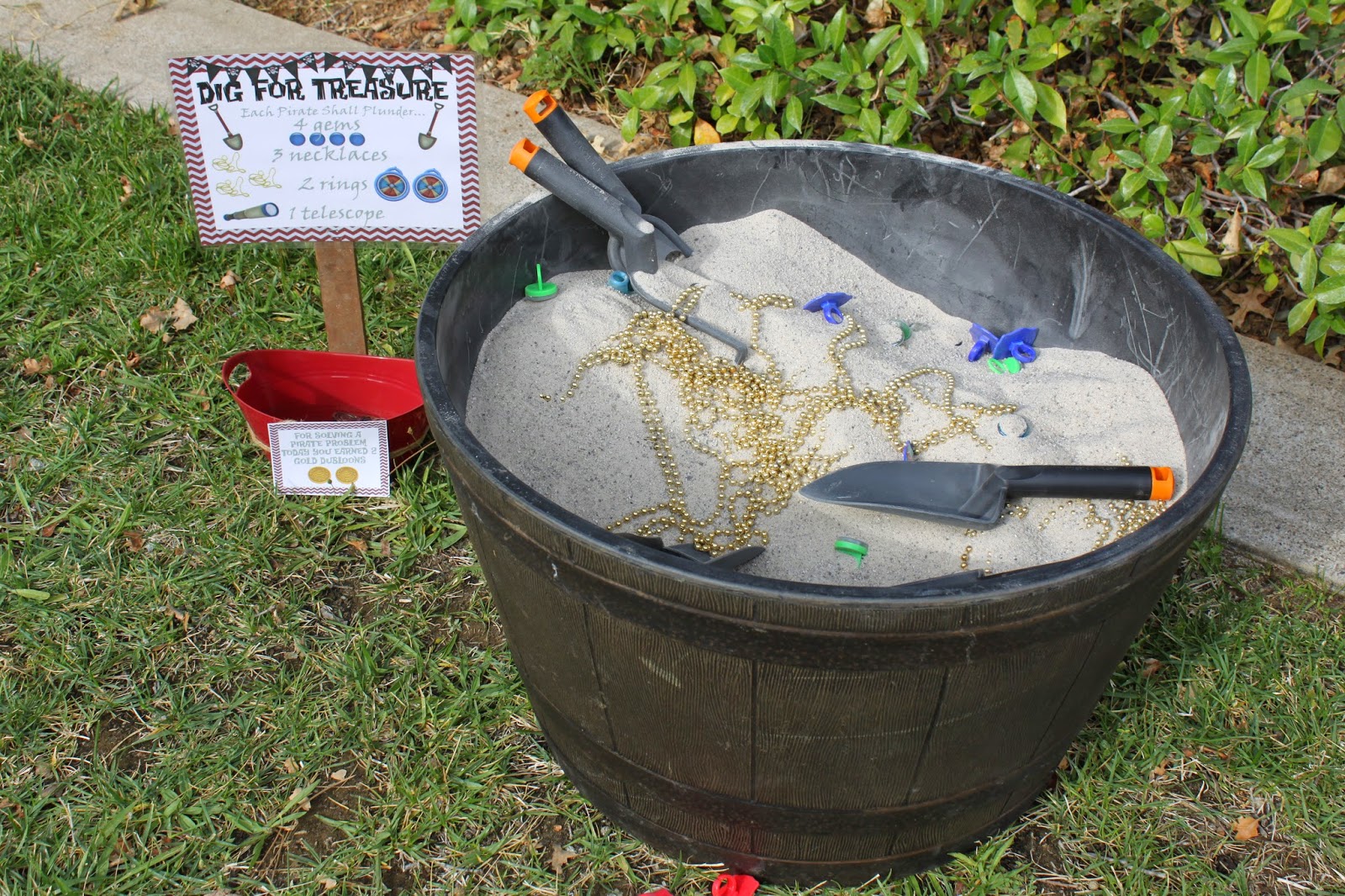 Filled with all kids of dollar store goodies.  The dollar store is my best friend when throwing a party.  These jewel rings would make great treasures as well.  And finally the “cannonball” toss (i.e. water balloons).  Since this birthday party was in September water balloons were no where to be found in the stores!  Thank goodness for amazon. 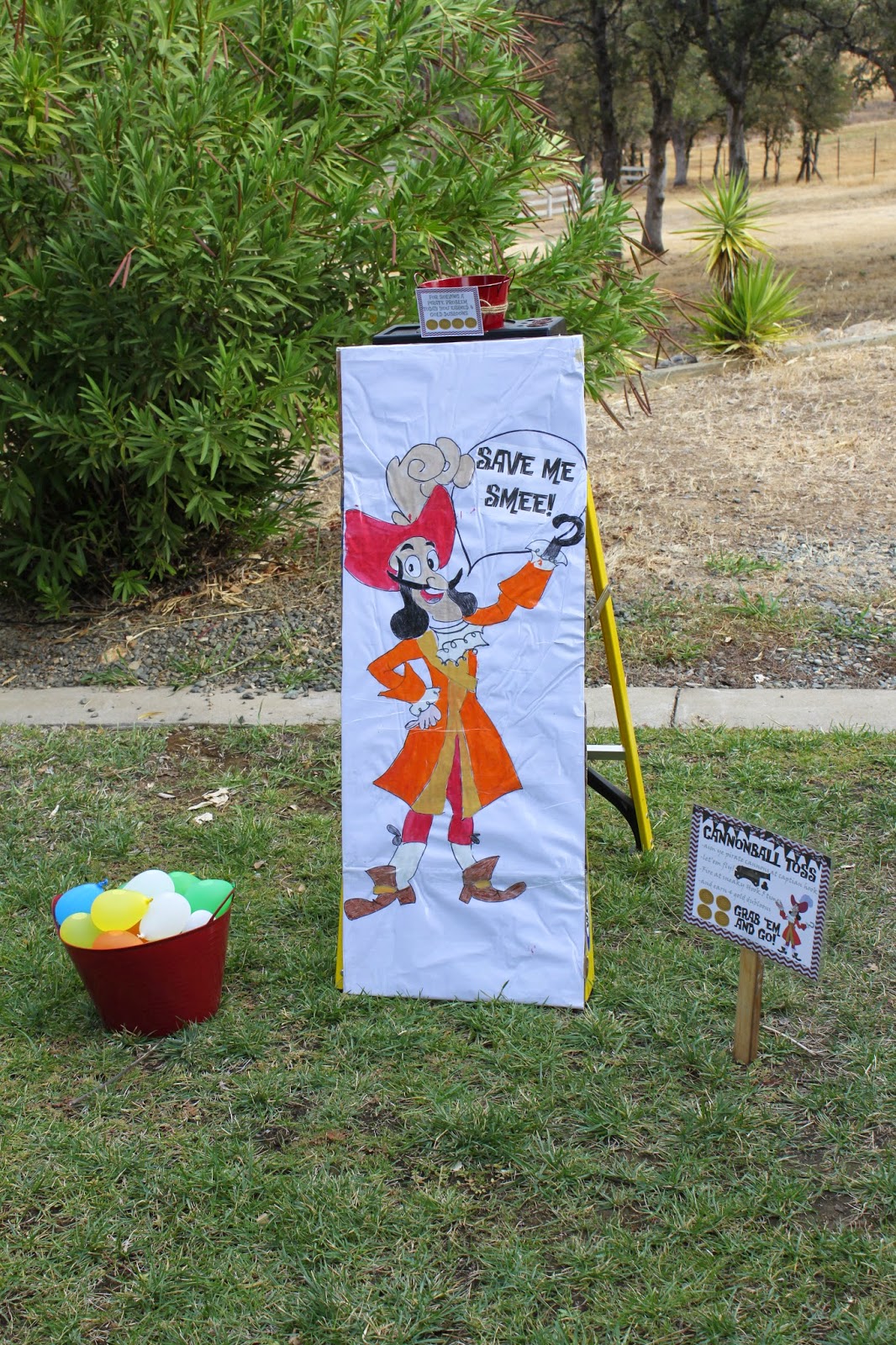 Notice the red buckets at each station where they can collect their gold dubloons after finishing.  Lucky me, my mother in law was able to borrow a projector from the school where she works so I used that to draw & paint the captain hook.

After we were done outside it was inside for lunch, cake and presents! On the menu was: 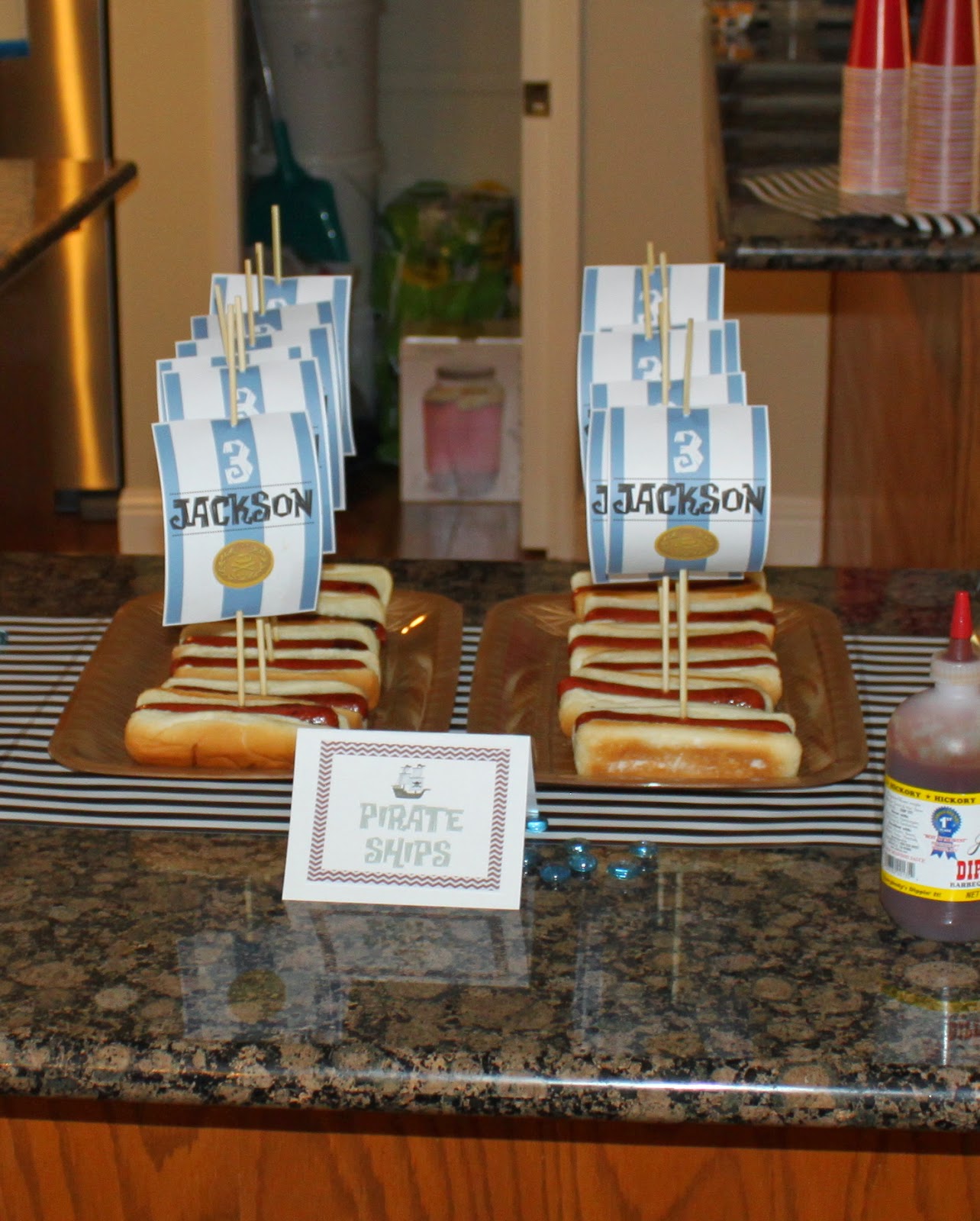 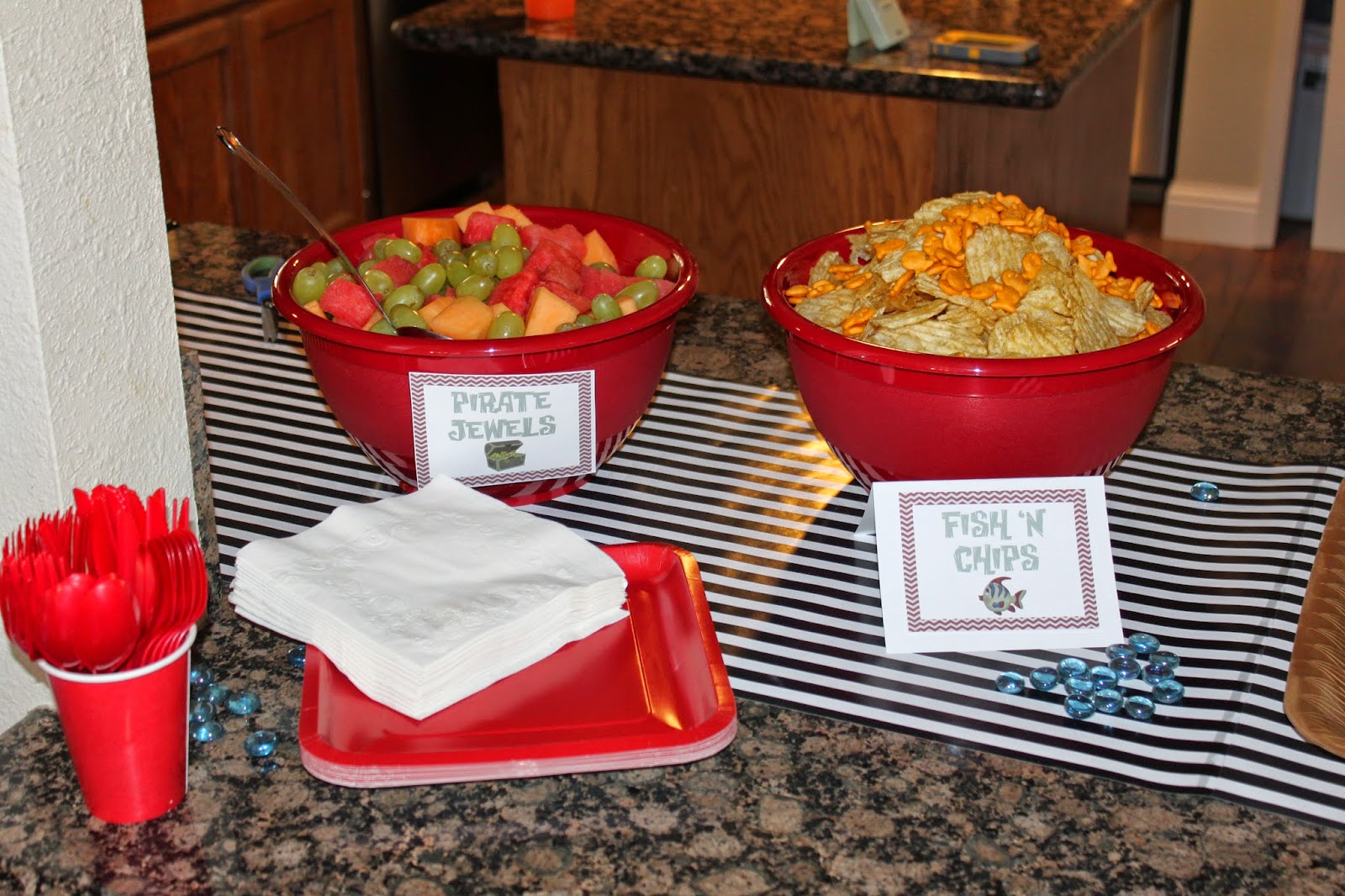 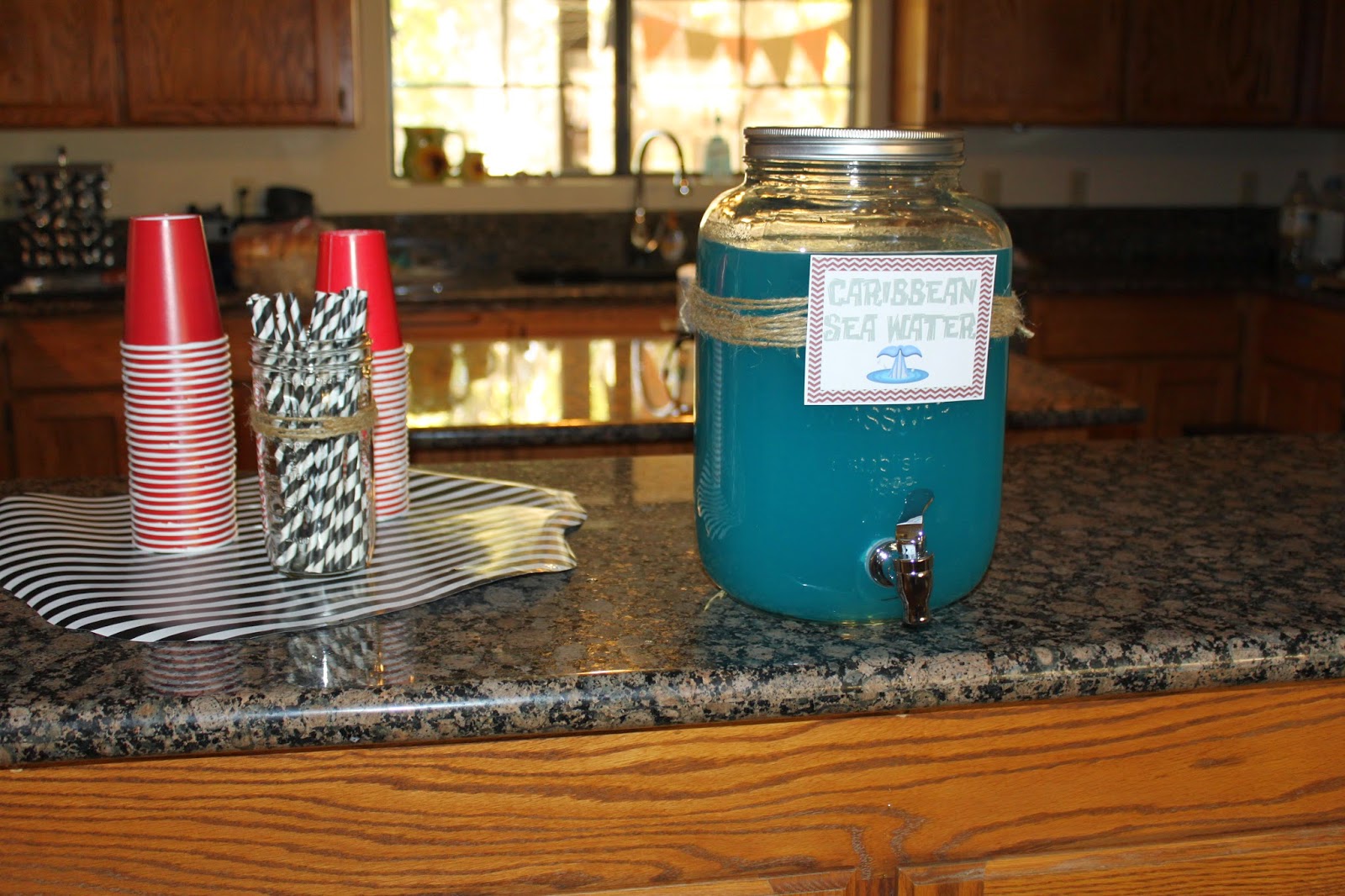 hawaiian punch (blue) and lemonade mixed together for our sea water punch. 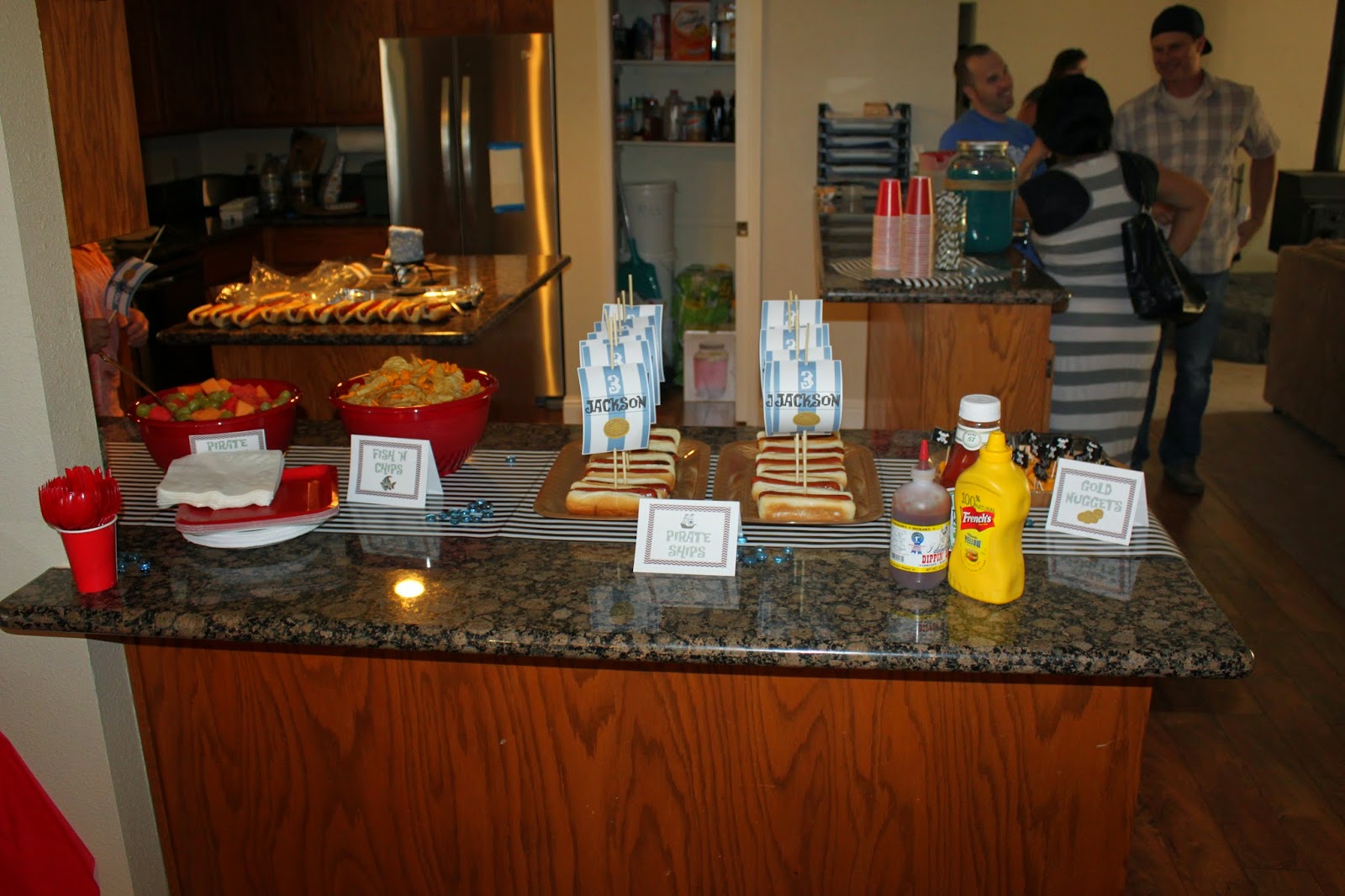 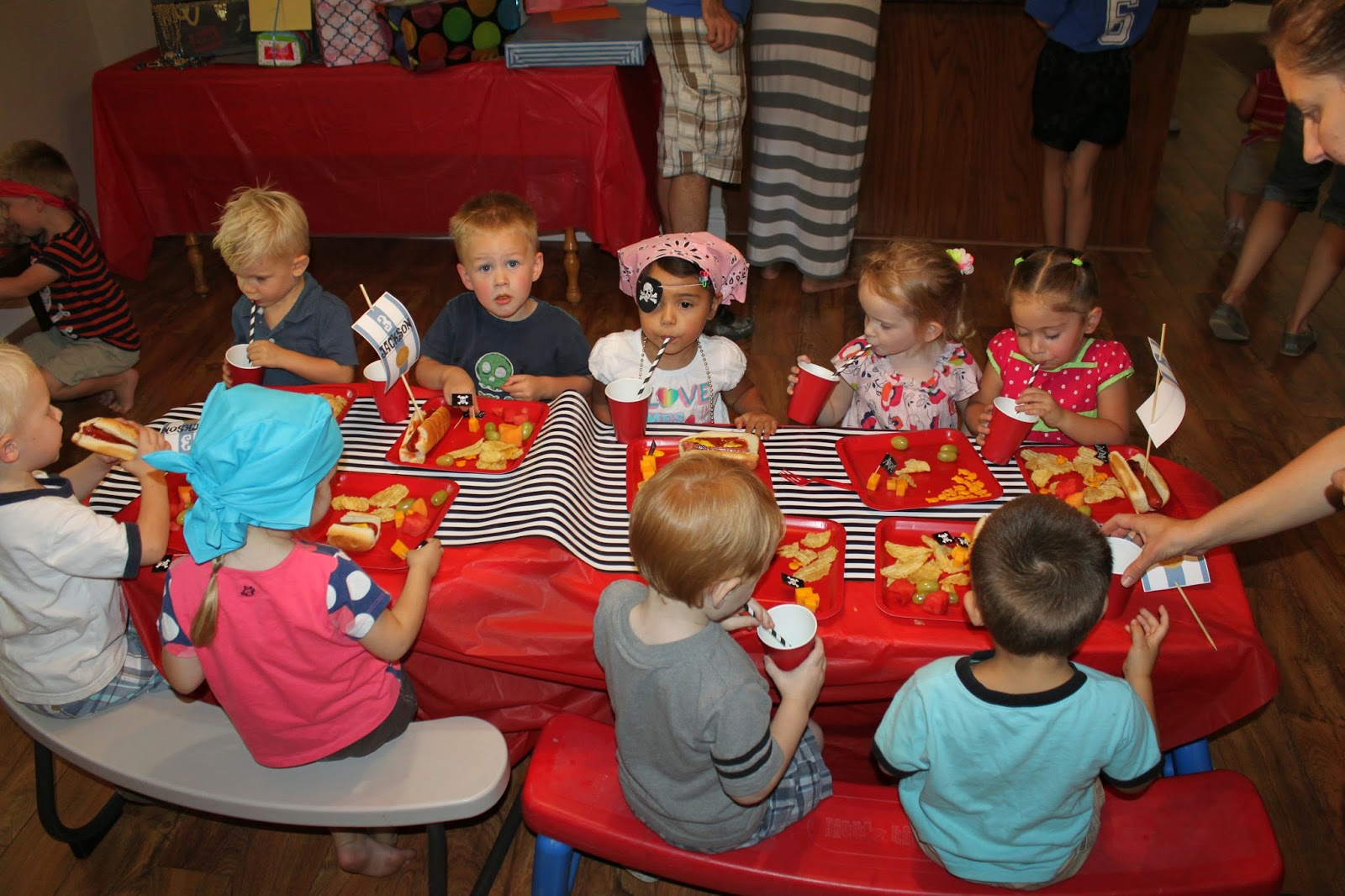 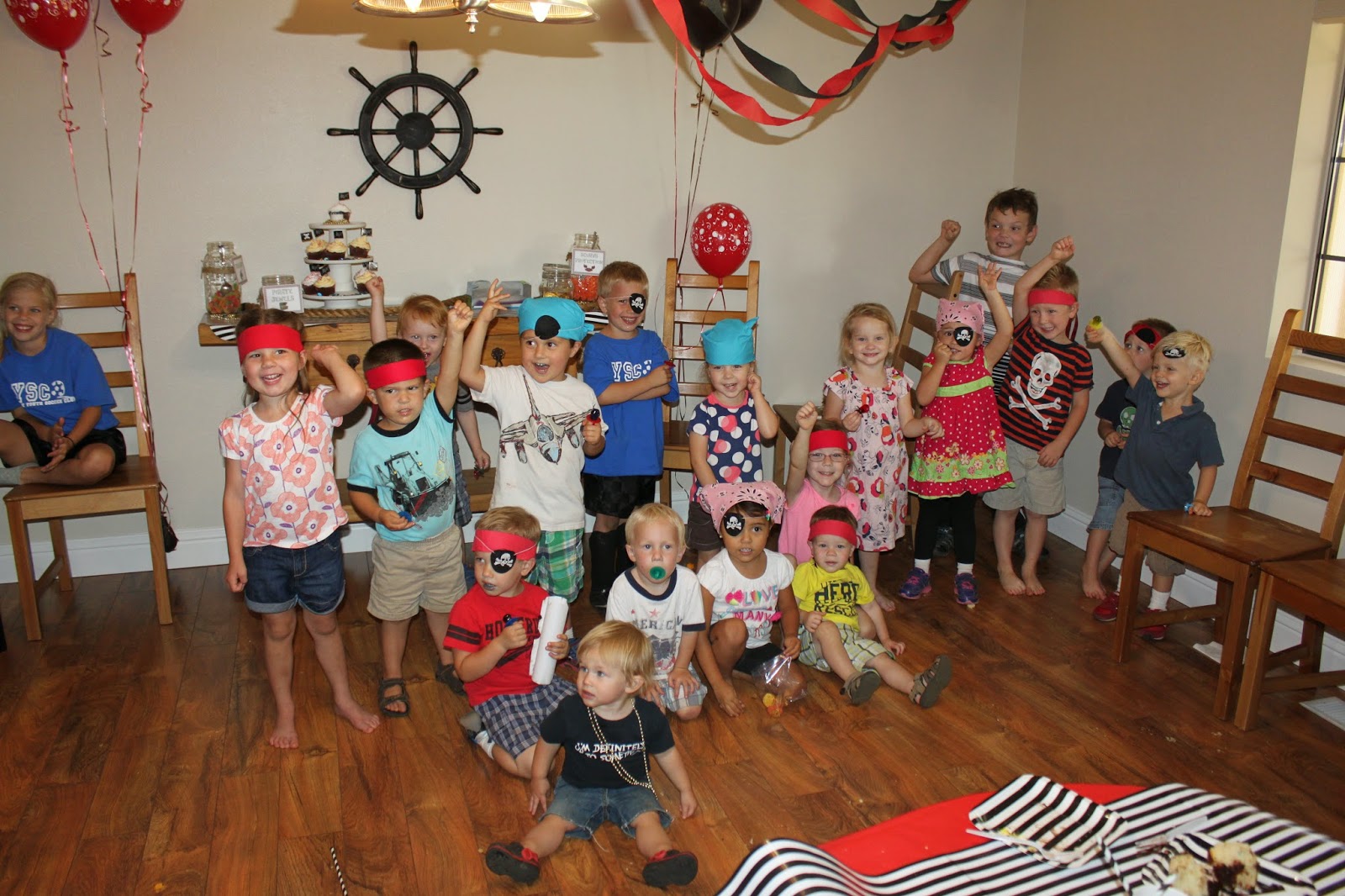 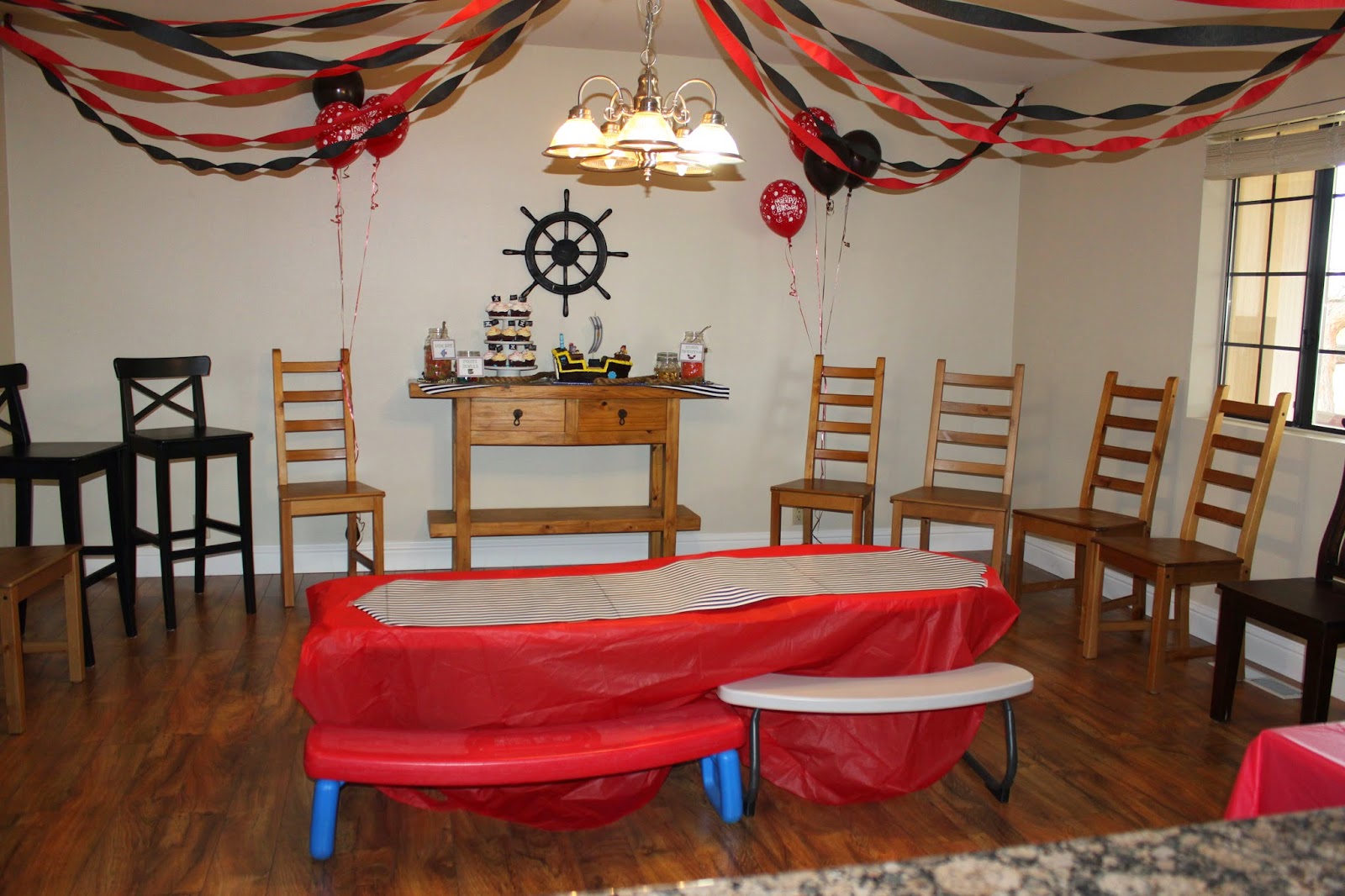 The pre party set up- kids tables because after all- the party is for 3 year olds!  I did what I could to dress it up.

And finally, the best part, the dessert table: 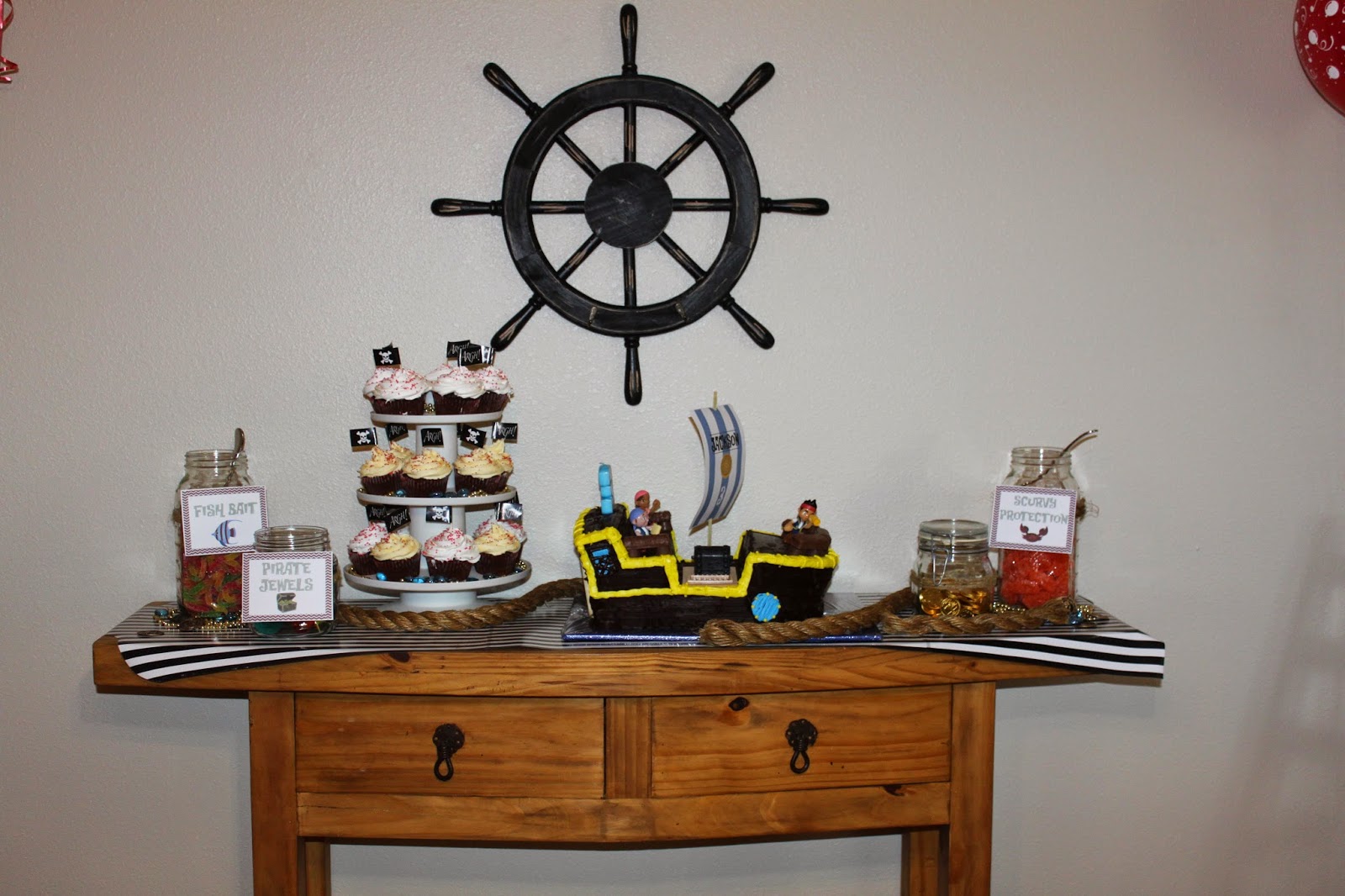 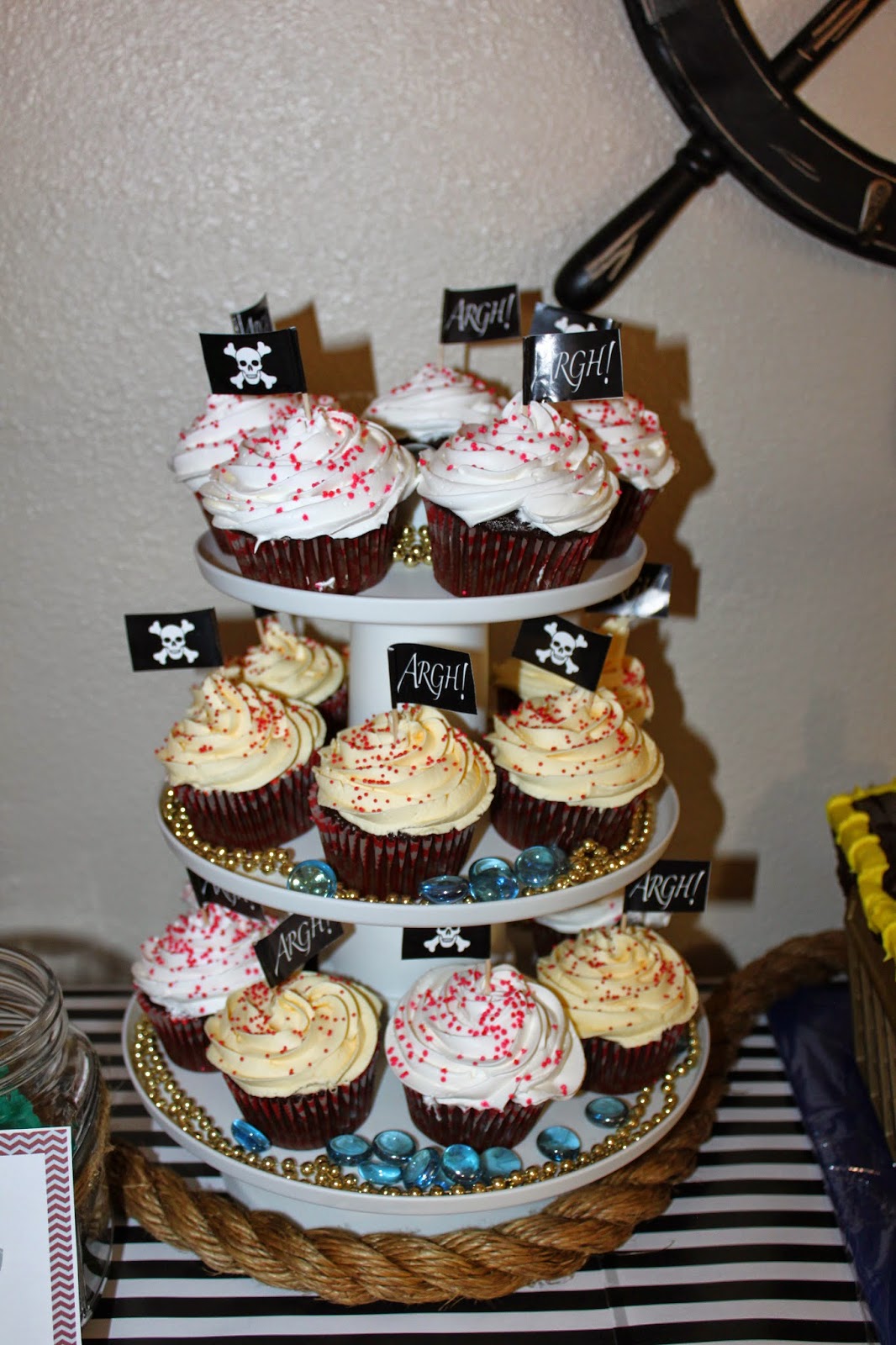 Double sided cupcake toppers found here (I also stuck them in the cheese cubes).  And you can find jake & the neverland pirate cupcake liners here. 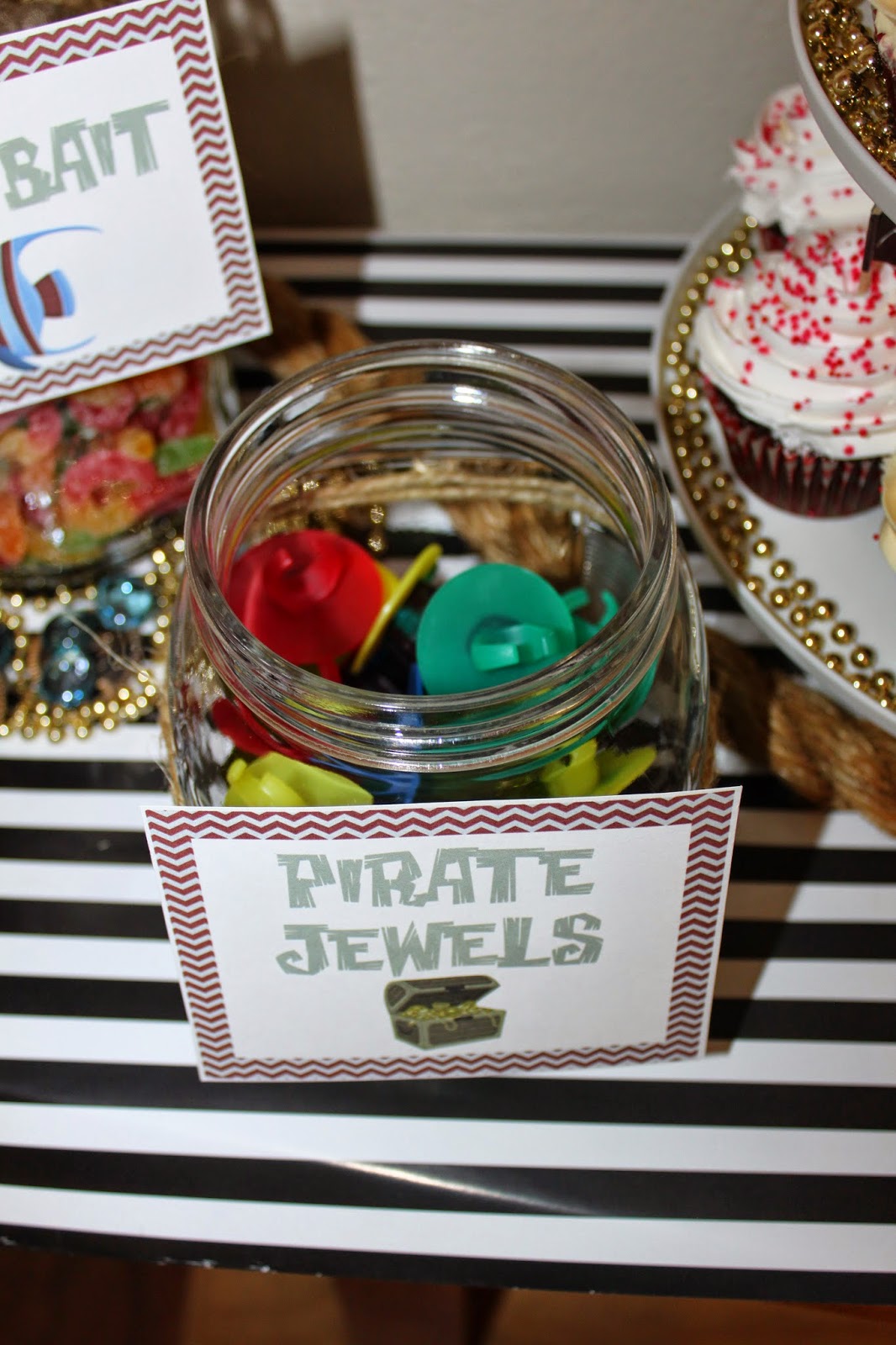 The kids were WAY more into the ring pops than anything else on the dessert table. And we didn’t have these cute little alligator gummies, but they would make a great addition as well. 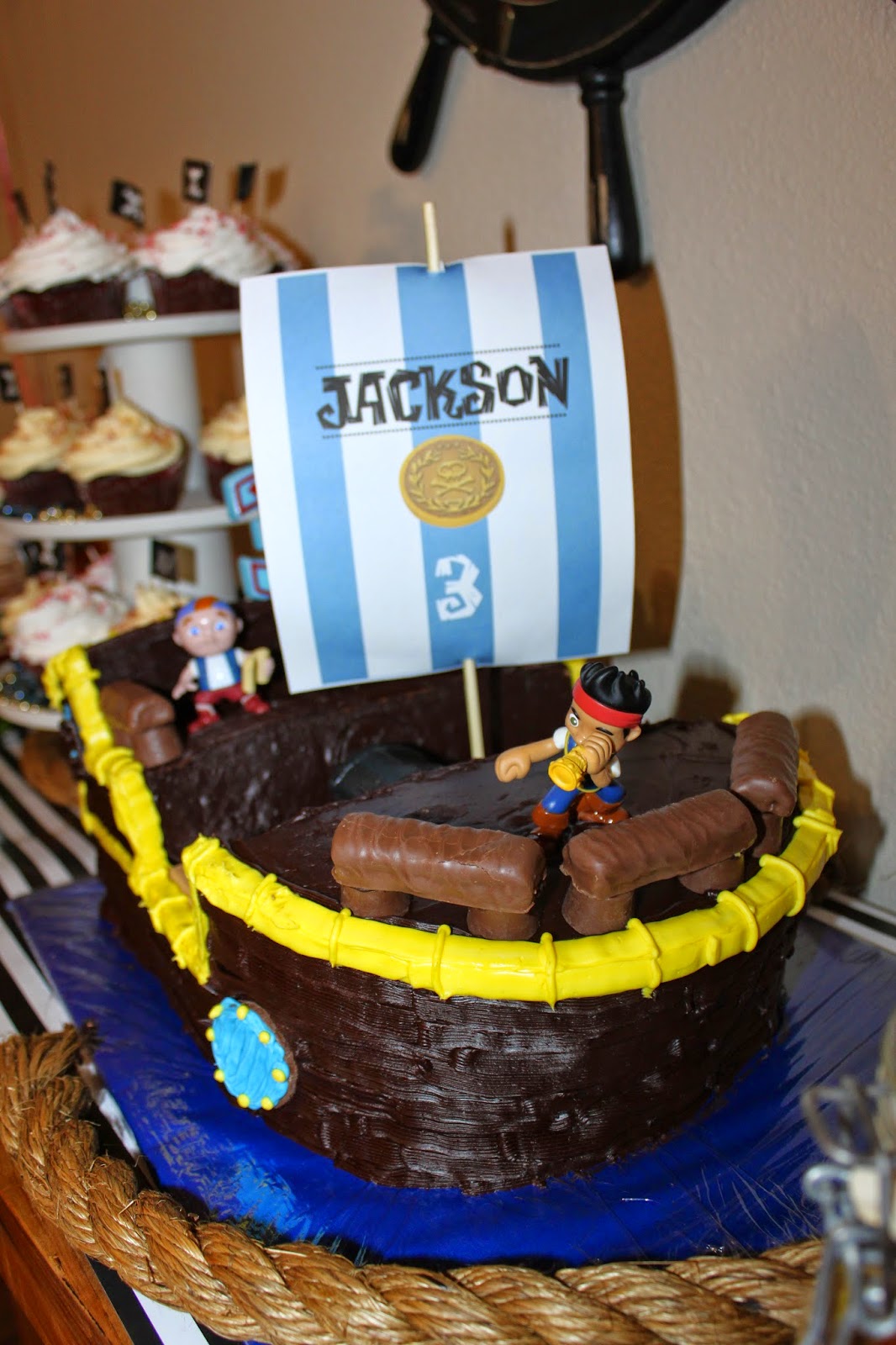 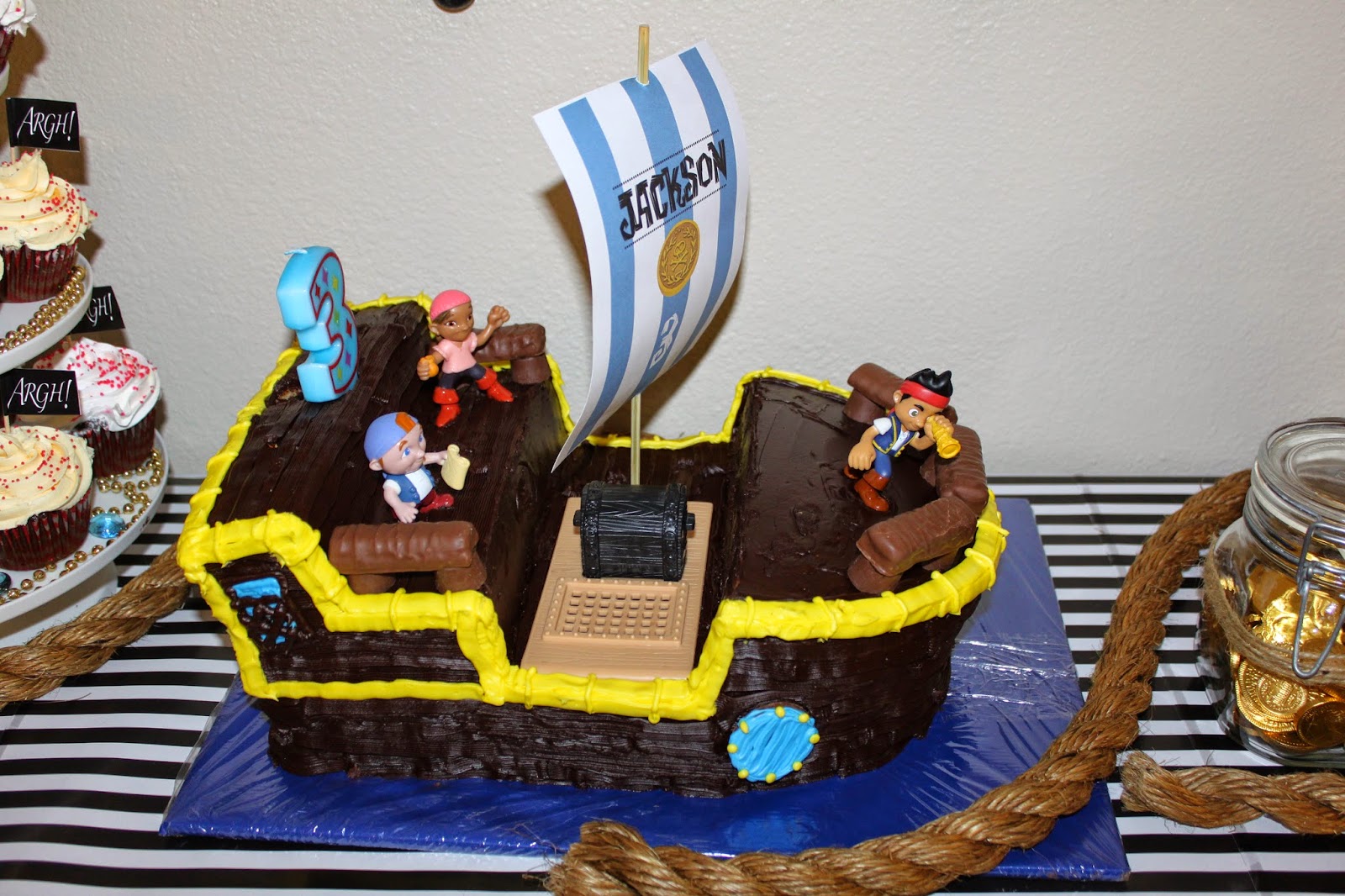 Can you believe this amazing cake that my mother in law made? She is amazing!! She found the figurines for the cake here.  They’re nice because you can reposition their arms and things the way you want them.  One lucky and happy birthday boy.  If you throw your kiddo a pirate party tell us about it!  Send in pictures!  I love to see everyone’s creative ideas. 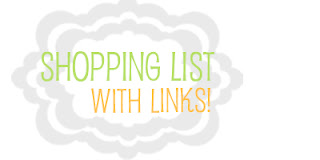 I can personalize pretty much any of the printables from this party for a fee ($5-$10), including the hot dog sails & food labels. Just email me partylikeacherry@gmail.com

If you’re getting ready to plan & throw a party, check out my post 6 things to consider when planning your next party to get you started!

*All the amazon links are affiliate links, which means I earn a small commission if you purchase something through that link.  Thank you so much for supporting my site! 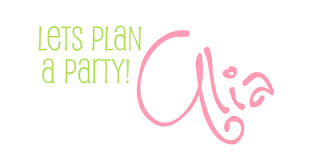